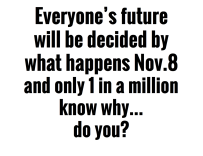 Human Extinction - Will Humans Save Themselves?

This might come as a shock, but unless humans save themselves, they will be going extinct in less than 500 years, due to runaway Global Warming. How do humans save themselves? Nothing complicated… with something that has been done before… similar to an Alcohol or Tobacco Tax… with a Carbon Tax. A carbon tax is a fee intended to make users of fossil fuels pay for the climate damage their additional CO2 makes, and to motivate switching to cleaner energy.

If humans have a Carbon Tax in 2017, they will save themselves. Deny or delay and humans will be gone from the Earth in less than 500 years. We know this because we can “see” global temperatures centuries into the future. By knowing the properties of carbon dioxide, we can project how much global temperatures will rise. It is almost like calculating the interest on a savings account.

Dec 2016 UPDATE: Humans did not save themselves in November, elected a global warming denying oligarch, and have put themselves on the path towards extinction within 500 years.

This November, humans must change roads (from extinction to survival) by electing a Congress that will vote for a Carbon Tax.

3. If they said NO to a Carbon Tax, say, “Thanks for letting us know that you do not care for us. You are not willing to protect us.” In November, all humans must prevent human extinction, by helping elect Representatives and Senators who support a Carbon Tax in 2017.

Note: Congress (House and Senate) is critical since they make the laws. 231 out of 232 House Republicans voted against a Carbon Tax in June 2016. Conservative Republicans who want to save humanity are actually more valuable since their votes are potentially worth 2 votes (a loss and a gain). The new movie, Before the Flood, emphasizes how urgent this is.

Dec 2016 UPDATE: Humans did not save themselves in November, elected a global warming denying oligarch, and have put themselves on the path towards extinction within 500 years. 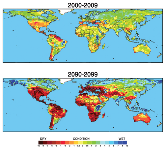 Drought in the 21st Century

These National Center for Atmospheric Research maps graphically show drought in the first and last decades of this century as projected by Global Warming data. The projected "Extreme Drought (bottom map) shows how human induced Global Warming will be so widespread as to devastate most of the U.S. and over half of Earth, IF we continue on our current path.

A Carbon Tax is the only way to stop Global Warming. Since Republicans are deniers and will block Carbon Pollution Tax legislation, we will not vote for any Republican until a Carbon Tax is passed. Sign our Carbon Tax petition here.

Denial appears to be the root cause of all human problems. Denial of truth and reality is the path to disaster, and humanity is walking that path. Includes assessment and mitigation.