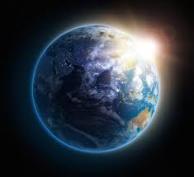 When most people think of spirituality, they think it involves “spirits”.

FSME is different from religions, as religions are based in belief/faith, whereas FSME is based in a truth/reality that can be tested, verified, witnessed, experienced. A total eclipse is an example of an FSME truth/reality experience.

Science is an example of truth/reality that can be tested, verified, witnessed, experienced… though few scientists think of it as spirituality. With this definition of spirit, science is built upon spiritual knowledge. A truth/reality that science can tell is the time and date of totality (USA, April 8, 2024). Scientists first found out about solar eclipses through written records (spirit).

Every human believes they have seen the sun, but humans only see the blinding glow of the sun and not the sun. Humans call that blinding glow the sun, but it is just the glow, like high-beams in the night are not the car. Only during totality (a total eclipse) can a human actually see the corona of the sun… the only part of the sun the human eye can see. During a total eclipse, the moon blocks all of the sunlight so that the sky gets dark, and this allows the corona to be seen around the disk of the moon.

A partial eclipse is nothing like a total eclipse, since the smallest amount of sunlight will keep the sky blue and the corona hidden. During totality, every human that has seen the corona is awe struck. Those who can see the white glow of the corona get a glimpse of the power of the sun. It is not like any other white light, because the corona is created by fusion plasma energy that powers the sun. That is why no photograph or video comes anywhere close to viewing the corona during a total eclipse.

This is being written because humans have all kinds of thoughts about what they see. The reality is that a total eclipse is the only time that a human can see the sun’s corona… and it is mesmerizingly awesome and wonderful. It should be… after all… it’s seeing Father Sun for the first time. Anyone who witnesses a total eclipse and enjoys seeing Father Sun is experiencing a FSME truth/reality moment. Note: Mexico, USA, Canada totality is on April 8, 2024 (see map at bottom of this page)

Life - The experiment that humans are failing

Many cultures and religions believe in a deity that created the world, the plants, the animals and humans. When one believes that, one should wonder why? For what purpose?

Let’s propose a purpose… Life (humans) could be a kind of experiment, where those animals that are “undesirable” (too selfish and toxic/deadly) do not survive and go extinct. In this way, advanced alien lifeforms that make it beyond the technology period only achieve it by overcoming selfishness. It is a most elegant way for Life to evolve… those that pass the test survive, those that don’t are eliminated. Humans are heading for elimination.

Humans think they are intelligent but are failing the experiment and will be eliminated from the planet. Even though humans could learn to see and save themselves, they prefer to remain selfish and blind.

Humans Are Blind (Humans are living in the Dark)

Complete the following: Humans are _(something)_. Anything you might say, also applies to a blind person. Humans do not think or believe that they are blind, because they are using a human frame of reference. Humans can see a little, but are blind to over 90% of the world. As supporting evidence:
1. HUMANS ARE BLIND TO THEIR OWN BLINDNESS.
Humans are blind to the fact that seeing is a continuum and that humans only see a small portion of that continuum. (Read Talk1)
2. HUMANS ARE BLIND TO THE INVISIBLE (that which they cannot see).
For example: the 3 states of water (solid ice, liquid water, and gas vapor). Humans can see and feel water in its solid and liquid form, but water as a gas becomes invisible.
3. HUMANS ARE BLIND TO TRUTH/REALITY.
Humans have thoughts and believe their thoughts. Humans would rather hold onto their beliefs than to know truth/reality. (Read Talk3)

STOP HERE: Only humans that recognize the above 3 Truths should read on. These Truths have a depth that should be undertaken, one at a time.

Human blindness is like looking at the ocean... only seeing the surface and blind to what lies below. When humans see the depth of these truths, then they will begin to wake up and learn to see how to live with wisdom, compassion and joy. That is the goal of Father Sun Mother Earth.

The world is composed of small bubble (egotistical)  humans and large bubble (less selfish) humans. The small bubble are short-term thinkers/impulsive, and the large bubble humans are longer-term thinkers/planners. The small bubbles are fine with lying (when needed) and larger bubbles know that truth (wherever possible) is the better long term approach. Human selfishness/ego has gotten so epidemic that humans are failing the experiment and will be going extinct. FSME is Middleway's attempt at getting a passing grade on the life experiment.

P.S. Father Sun Mother Earth is being developed, in the here and now... and you are among the first to read what took Middleway over 50 years of seeking... all through the wonders of the Internet.
Thanks for reading... Middleway, August 30, 2017

Click this image to see the front of the Totality card that Middleway gives out. It represents an image of the Sun... the yellow area is the blinding ball and the white area is the normally invisible corona that is only visible during a total eclipse :-) 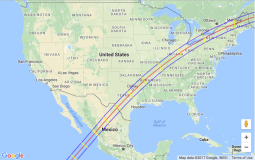