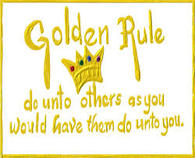 "Never impose on others what you would not choose for yourself." Confucius (500BC)

Many consider “The Golden Rule” or ethic of reciprocity as a key principle found in every religion, suggesting it is related to a fundamental human quality. IAS seems to be that human quality.

IAS, Invisible Animal Self, is all about “you, yourself, self, likes, and dislikes”. The Golden Rule adds in “others”, saying to treat others as you would like to be treated. Humans with IAS focus on “self” and not “others”, so the Golden Rule allows “self” to see “others” as “another self” (another human with similar likes and dislikes).

In this way, the Golden Rule is a way for self-centered humans to act more ethically, by treating others like you would like to be treated. In other words, understanding others by understanding yourself. Unfortunately, humans cannot fully understand themselves because IAS is subconscious.

By decreasing IAS (self), consciousness can expand to include others, which is greater than just “another self”. All religions try to teach a reduction of self and caring for others. Likely, the reason religions have been unsuccessful is because IAS operates invisibly/subconsciously. Recognizing IAS is the first step in the cure… like graduating middle school and moving on to high (higher consciousness) school. Expanded consciousness moves beyond limited “self” consciousness to include “other” consciousness… like the Golden Rule 2.0. By expanding consciousness, self (IAS) gets reduced and wellness/happiness increases.