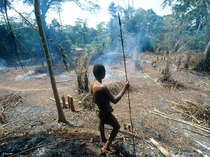 “Neuroscience shows you are not an individual. You are made up of multiple competing drives.” Dr. David Eagleman, The Brain, Who is in Control?, Ep3, NOVA

All animals, including humans, have a subconscious survival self that helps that animal survive. It helps the animal move (walk), eat, breathe, avoid danger, etc… all done subconsciously. SSS is critical for an animal’s survival. SSS begins with a baby’s first breath and can be seen in the “fight or flight” response in almost every animal. Every human should be able to recognize that they have an SSS, a subconscious survival self that determines their actions, in order to survive. Even an infant that can crawl, will not crawl off a cliff.

When SSS is fully developed varies greatly among animals. The moment they are hatched, fish are able to survive on their own. For mammals, it usually takes days or months. For social animals like humans, it takes years for them to be able to learn the skills to subconsciously survive on their own.

At what age do you think humans are able to survive on their own, without the aid of a parent? Since survival often depends on the ability to defend oneself, human children, probably around the age of 10-13 could learn the skills to be able to survive. In humans, SSS is likely set around 10-13 (middle school age).

The good of SSS is that when threatened, SSS helps an animal survive. The downside of SSS is that it operates subconsciously, that humans are not conscious of it, so what it does is “invisible” to humans. None the less, humans should be able to acknowledge that they have an inner SSS that controls many (most) of their actions.

SSS is largely concerned with what the 5 senses detect and what is in the immediate vicinity. It is primarily concerned with “likes” (what to eat, where to sleep), “dislikes” (what not to eat, where not to go), and what to ignore (what isn’t a like or dislike, what is not important for survival). For humans, that means that SSS causes us to like sweets, dislike spoiled food, and ignore what is not important for immediate survival. Since SSS operates subconsciously, SSS is responsible for the obesity epidemic and for the (ignorance) denial of things that aren’t immediate dangers.

Another downside of SSS is that it can be co-opted… it can be misinformed and misled… leading to humans acting more like animals. Hitler, Mussolini, and Bush/Cheney are some recent examples of leaders who promoted fear in order to illicit the “fight” response. For many current leaders (i.e. Kim Jong-il, Murdoch), the more fear and hatred they create, the more powerful they become.

Because survival requires quick responses, SSS bypasses our conscious (slower adult) brain. SSS relies on the 5 senses and what is an immediate danger. Humans have 5 very limited senses, which can detect less than 1/1000th of what scientific instruments can detect. SSS ignores non-immediate dangers, so in not concerned with invisible or very slow moving threats, like CO2 pollution and global warming.

In our modern world, SSS is the same as MSD.